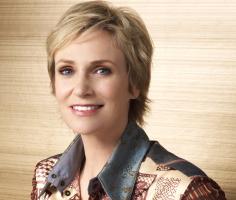 'Glee's Jane Lynch has confirmed she is now engaged to her longtime girlfriend.

Lynch confirmed the report as she was asked about the rumored engagement at a 'Glee' party over the weekend.

"Yes, yes, it's true!" she said of her engagement to psychologist Lara Embry.

"We don't have any plans at all yet," she added. "But I have a ring and everything. We're very happy and very excited!"

It's been rumored that the couple plans to walk down the aisle in May.

'Glee' returns with the second half of its first season on Tuesday night.

"This a psychological relief!", Lynch, who is known for her guest starring roles, says of being on the regular cast of a show.

"Knowing that I get to do this show and play this character and work with these people for another year is just thrilling to me! We're booking! It's really good!"