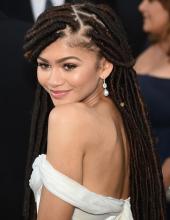 Giuliana Rancic is apologizing after being called out by Zendaya Coleman for insulting the singer's dreadlocks hairstyle at the 2015 Oscars.

During her coverage of the 87th Annual Academy Awards, Rancic said about Zendaya's dreadlocked hair: "I feel like she smells like patchouli oil... or maybe weed."

Zendaya didn't take it lying down and remarked on social media: "There is a fine line between what is funny and disrespectful."

"Someone said something about my hair at the Oscars that left me in awe. Not because I was relishing in rave outfit reviews, but because I was hit with ignorant slurs and pure disrespect. To say that an 18-year-old woman with locs must smell of patchouli oil or 'weed' is not only a large stereotype but outrageously offensive."

"Do you want to know what 'Selma' director Ava DuVernay, 'Waiting to Exhale' author Terry McMillan, and Grammy-nominated singer Ledisi have in common? Locs. None of which smell of marijuana. There is already harsh criticism of African American hair in society without the help of ignorant people who choose to judge others base on the curl of their hair. My wearing my hair in locs on an Oscar red carpet was to showcase them in a positive light, to remind people of color that our hair is good enough."

"To me locs are a symbol of strength and beauty, almost like a lion's mane," she added. "I suggest some people should listen to India Arie's 'I Am Not My Hair' and contemplate a little before opening your mouth so quickly to judge."

Judging the tide was not on her side, Rancic finally apologized online on Tuesday before making a statement on E!.

"Dear Zendaya, I'm sorry I offended you and others," she wrote. "I was referring to a bohemian chic look. Had NOTHING to do with race and NEVER would!!!"

"Now, as you know Fashion Police is a show that pokes fun at celebrities in good spirit, but I do understand that something I said last night did cross the line. I just want everyone to know, I didn't intend to hurt anybody – but, I have learned, it is not my intent that matters, it's the result," she said.

"And the result is that people are offended, including Zendaya, and that is not okay. Therefore, I want to say to Zendaya, and anyone else out there that I have hurt, that I am so, so sincerely sorry."

"This really has been a learning experience for me. I've learned a lot today, and this incident has taught me to be a lot more aware of clichés and stereotypes, how much damage they can do – and that I am responsible, as we all are, to not perpetuate them further."