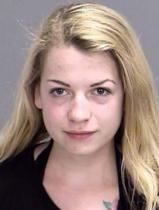 A 19-year-old student taking a topless selfie while behind the wheel crashed into a police car in Texas.

Miranda Rader rear-ended the police vehicle while sending the photos to her boyfriend on Snapchat.

"I asked her why she was not dressed while driving," the officer wrote in his report, "and she stated she was taking a Snapchat photo to send to her boyfriend while she was at a red light."

The officer said he found Rader had an "unclasped brassiere" and was rushing to put on her top.

She also had an open bottle of wine in a cup holder and was arrested on suspicion of driving while intoxicated.

The Texas A&M University student hit the police car with such force that it deployed the airbag.