Gibson 'Disappointed' After Being Fired From 'Criminal Minds' Over Altercation 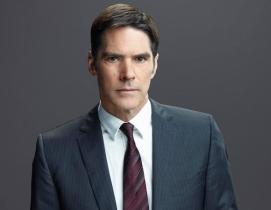 Fired Criminal Minds star Thomas Gibson says he's saddened by the turn of events that led to his firing.

Gibson was dismissed from the long-running CBS drama last week after an on-set altercation with a writer-producer.

The 54-year-old actor kicked the man after getting into a verbal argument that turned physical. He was initially suspended for two episodes before being fired by CBS.

"I love Criminal Minds and have put my heart and soul into it for the last 12 years," Gibson says.

"I had hoped to see it through to the end, but that won't be possible now. I would just like to say thank you to the writers, producers, actors, our amazing crew, and, most importantly, the best fans that a show could ever hope to have."

"I wish I could thank each of you for your friendship and support. I love 'Criminal Minds' and I'm disappointed by what's happened," he says on social media. "The support you show means the world to me and my family. This is not an ending, but a beginning as well. Thank you all."

Gibson had been consulting a law firm to determine whether he had a case against the show's producers.

CBS says it will announce "how the character's exit will be addressed at a later date." Gibson had been with the show since it premiered in 2005.