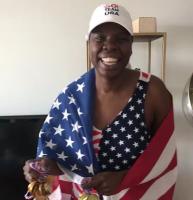 'Ghostbusters' and 'Saturday Night Live' star Leslie Jones is joining NBC coverage of the Olympics after she enthusiastically live-tweeted about the games over the weekend.

Jones chanted 'USA! USA!' on Twitter as she encouraged athletes and shared clips from her television while wearing stars and stripes, plastic gold medals and carrying an American flag.

Jones is on her way to Rio and will join the coverage starting Friday. She will attend Olympic events, add her voice to the commentary, post on social media, and conduct interviews with athletes.

"We're thrilled to have Leslie come to the Olympics," Bell says. "She's a member of the family, and her passion for the Olympics is remarkable."

Her role is being officially described as a "contributor."