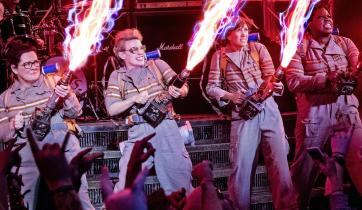 The early reviews for the 'Ghostbusters' all-female reboot are in and fans can take a deep breath because it doesn't appear to be to disaster many feared, for the most part.

The New York Times critic describes Ghostbusters as "a movie that is a lot of enjoyable, disposable fun." She adds it's "pretty much what you might expect from Paul Feig, one of the best things to happen to American big-screen comedy since Harold Ramis."

GQ calls it "a fresh spin on the same elements as the original." Adding, it's "casually feminist, unfailingly pacy and finds an exact mid-point between razor sharp and pleasingly dumb comedy."

The Guardian says fans should "call off the trolls" since "Fun oozes from almost every frame."

"The mean-spirited reception to the film before anyone had seen it does not seem to have put a dampener on the movie itself," he concludes.

But not all the 'Ghostbusters' reviews have been positive. Two notable publications have slammed the film.

Chicago Sun Times' Richard Roeper describes the movie as "a horror from start to finish."

"How could so many talented, well-meaning artists, who clearly loved and respected the original, produce such a raggedy-looking, thuddingly unfunny, utterly unnecessary reboot?," he asks.

While Variety says "Sony's new gender-swapped Ghostbusters suffers from a disappointingly strong case of deja vu" that's "both funnier and scarier" than the original.