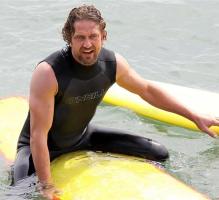 Gerard Butler had to be hospitalized after he was pulled under while filming a surfing scene for the movie Of 'Men and Mavericks'.

The San Jose Mercury News reports the 42-year-old Butler was paddling out with three professional surfers at Mavericks -- a surfing spot in Northern California known for its massive waves -- when waves 15-feet tall broke and sent the actor and his tethered surfboard under the water.

"Butler was held down for a solid two waves and took four or five more waves on the head," says surfer Frank Quirarte. "He was then washed through the rocks on the inside before he was finally able to be plucked out."

"He had that 100-yard stare that surfers get after a two-wave hold-down or near-death experience," he adds. "After almost 20 years at Maverick's, I've seen a lot of it but it was good to see he was standing on his own two legs."

Butler was taken to Stanford Medical Center for observation but is said to be fine.

"Everything he was doing was within reason," explains another experienced surfer, Zach Wormhoudt. "We took like four to five pretty big waves on the head. Basically there's nothing you can do. It was intense for myself, and I've been through a lot out there."