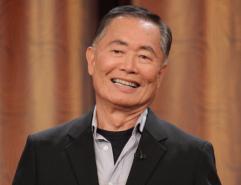 In an appearance with Conan O'Brien, George Takei playfully puts down William Shatner and Leonard Nimoy.

Takei says he couldn't imagine Shatner, who wanted to appear in JJ Abrams' 'Star Trek', in the films but adds Nimoy was a perfect fit.

"Can you imagine Bill Shatner running around those corridors like Chris Pine did? That's not a pretty sight," he says.

Takei also explained he was a little surprised when he first heard Benedict Cumberbatch would be playing Khan.

"Khan is a South East Asian name. An East Indian name," he explained. "Ricardo Montalban is a Latino. Gene Roddenberry's idea was to include the diversity of this planet."

"So to learn he had cast a white English guy was really shocking because Ricardo owned that part."

Unfortunately, Conan was so taken by Takei's voice that we never got to hear the end of the observation.