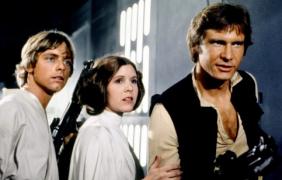 George Lucas may let slip a major reveal about who will return for 'Star Wars: Episode VII'.

In an interview with Bloomberg Businessweek about the sale of Lucasflim to Disney for $4 billion, Lucas said: "We had already signed Mark and Carrie and Harrison -- or we were pretty much in final stages of negotiation."

"Maybe I'm not supposed to say that," he then said. "I think they want to announce that with some big whoop-de-do, but we were negotiating with them."

Then in an attempt to backpedal, Lucas added: "I won't say whether the negotiations were successful or not."

The 'Star Wars' creator says he's been spending much of his time with Mellody Hobson, the Chicago money manager he became engaged to in January.

But he's been a part of the discussions about the new trilogy, especially about the intricacies of the franchise's universe.

"I mostly say, 'You can't do this. You can do that?' You know, 'The cars don't have wheels. They fly with antigravity.' There's a million little pieces. Or I can say, 'He doesn't have the power to do that, or he has to do this.' I know all that stuff."

JJ Abrams is onboard to direct Episode VII, which Disney plans to release in 2015.