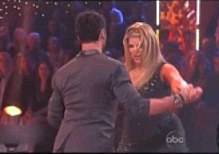 George Lopez is apologizing for Kirstie Alley for comparing her to a pig.

"I misjudged the joke," Lopez says on Twitter. "No malice was intended and I apologize to Kirstie."

This after the comedian joked earlier this week that Alley did a good job on 'Dancing with the Stars' with "her little hooves tapping away."

He continued the comparison with his own version of 'This Little Piggy', complete with a clip of a pig with its head out of a car window.

"Before the show she went to the market, and then she had roast beef, and this is her going all the way home," he said.

Alley appeared to be taking the cracks in stride with her comments on Thursday: "Don't worry about George's comments. Just remember what happens to the big bad, drunk wolf... falls in a boiling pot of vodka. Piggy laughs."