Geena Davis Recalls How She Turned Down Jack Nicholson's Advances 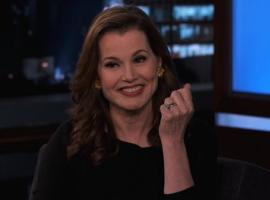 Davis even throws in a Nicholson impression or two to make the retelling even better.

"Dustin Hoffman is very mentoring and was really, really great about advice and tips," Davis said of when she was starting out in Hollywood.

"Actually one day he said 'I know you're going to move to Hollywood and be successful and your co-stars are going to hit on you. You should not sleep with your co-stars. It's a bad idea and I just recommend completely against it.'"

"He said 'So here's what to say. When they hit on you say 'I would love to. It's very flattering but I'm afraid it would ruin the sexual tension between us.'"

"Oh wow," marveled Kimmel. "Does that work? Did you try that at all?"

The actress then explained how she ended up meeting Jack Nicholson often when she moved to Hollywood.

"So we come home one day and there's a message to call Jack Nicholson."

Davis then reenacted the phone call and how Nicholson tried to convince her to come over.

But she pulled out the line that Hoffman had told her, to which Nicholson replied: "Oh my god, where'd you get that?"