Gary Oldman Tells Jimmy Kimmel: 'I Am an A—Hole, I Should Know Better' 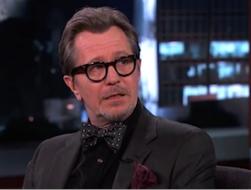 A day after releasing an official statement, Gary Oldman apologized once again for an interview in which he criticized political correctness and defended Mel Gibson and Alec Baldwin, admitting it was "poorly considered, insensitive, pernicious and ill-informed."

"It was an article I did with Playboy and I said some things that were poorly considered. Once I saw it in print, I saw that it was insensitive, pernicious and ill-informed," Oldman said on 'Jimmy Kimmel Live'.

"You know, words have meaning. They carry weight and they carry long after you've said them. And I don't condone or excuse the words I used in any context. I just basically shouldn't have used them in any context."

"But I did and I have deeply injured and wounded a great many people. I appreciate you having me here and extending your hospitality to put me in the seat once again and it gives me the opportunity to tell those people from my heart that I'm profoundly, profoundly sorry and deeply apologetic."

"Especially to the fans because they've been so incredible to me and very loyal. My nickname is like they're Team Oldman. I really feel I've let them down."

"I am a public figure, I should be an example and inspiration and I am an a—hole. I am 56 and I should know better. To them I also say I extend my apology and my love and best wishes to my fan base."

"I stepped out of my area of expertise and I just landed both feet in a hornet's nest."

As Kimmel tried to transition to Oldman's 'Planet of the Apes', the British actor said: "I only ever wanted to Planet of the Apes and this thing, news cycle, event has sadly derailed what my initial purpose was."