Extended Look At Games, Performers and Celebrities On Fox's 'Riot' 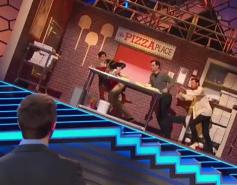 But with the series now set to debut on May 13, the network has released a three minute video from the set that introduces us to Australian host Rove McManus, the show's lineup of performers, a few of the celebrities we can expect and, of course, the games.