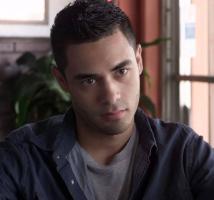 Fox has cast Gabriel Chavarria as its male lead in 'War of the Planet of the Apes'.

Chavarria, who is best known for teen drama East Los High, will play one of two human leads in 'War of the Planet of the Apes'.

Matt Reeves will return to direct the feature in the prequel series for 'Planet of the Apes' that has a July 2017 release date.

"As this story continues, we know that war is not avoided by the end of Dawn. That is going to take us into the world of what Caesar is grappling with. Where he is going to be thrust into circumstances that he never, ever wanted to deal with, and was hoping he could avoid," Reeves teased in a recent interview.

"And now he is right in the middle of it. The things that happen in that story test him in huge ways, in the ways in which his relationship with Koba haunts him deeply. It's going to be an epic story. I sort of described it where in the first film was very much about his rise from humble beginnings to being a revolutionary."

"The second movie was about having to rise to the challenge of being a great leader in the most difficult of times. This is going to be the story that is going to cement his status as a seminal figure in ape history, and sort of leads to an almost biblical status. He is going to become like a mythic ape figure, like Moses."