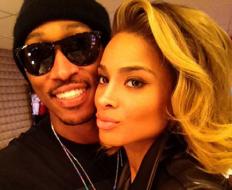 ) over visitation with their 20-month-old son.

"This bitch got control problems," the rapper began his rant. "I gotta go through lawyers to see babyfuture."

"The f--kery for 15k a month. I jus want babyfuture that's all... I been silent for a year & a half... I ran outta patience Get ready for this classic."

"I'm not bitter. People think I'm bitter because she moved on, but I'm good. I'm taking care of me. I don't need him—she needs him," he said last year.

Asked about photos of Wilson pushing his son in a stroller, he said: "Of course I wouldn't want someone pushing my son. Like, that's the number one rule."

"You know this dude for a few months and you're bringing him around your kid? Who does that? Nobody does that."

According to Us Weekly, the pair broke their engagement after Future cheated three months after the baby.