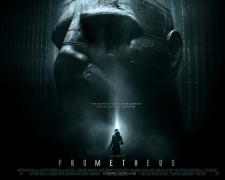 If the first trailer over three months ago, had you thirsting for more, Ridley Scott has finally debuted the full theatrical trailer for his return to space.

And if you had any doubt that the film is the long rumored prequel to 'Alien', the trailer ends with the same music from the trailer of the original 1979 film.

"A team of explorers discover a clue to the origins of mankind on Earth, leading them on a journey to the darkest corners of the universe," reads the official description. "There, they must fight a terrifying battle to save the future of the human race."

), Micheal Fassbender, Idris Elba and Guy Pearce. The film has a release date of June 8, 2012.