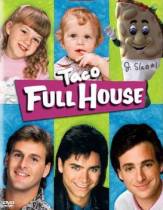 A fan has created a fictional game called 'Full House: Tournament Fighter' based on the early '90s family sitcom.

Inspired by the hit game 'Street Fighter', the game lets you select players and pit them against each other.

It features all the main characters but the video features a battle between Uncle Jesse and Joey.

What makes it fun is watching each one utilizing his very unique and special powers.