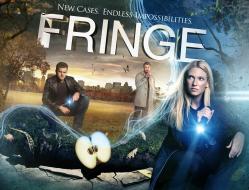 'Fringe' dropped a three minute trailer for the upcoming final season at its Comic-Con panel on Sunday.

Stars Joshua Jackson, Anna Torv Lance Reddick, John Noble and Jasika Nicole were also on hand and revealed the trailer was filmed last season to serve as a sales pitch to earn the series a final slate of episodes.

"This was a testament to how much everybody loves the show," said executive producer J.H. Wyman.

The new season will take place in the year 2036 when the Observers have taken over the world, picking up almost right where it left off.

Wyman admitted the final chapter for the series had changed since season one, but for the better.

"Those changed, to be honest, because people bring things to the pie that you don't really expect and then it makes you think about a whole different way to go," he said.

Joshua Jackson and Anna Torv also said the cast has been let in on the ending.

"This year, I think because there are only 13 episodes and also because it's the end of the show, they're thinking about it," Torv said. "I have more information than I ever had before which is really exciting because it means you can do the fun bit, which is planning the arc."

The fifth and final season of 'Fringe' begins on Friday, September 28 on FOX: