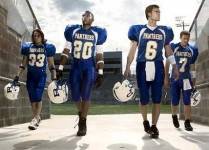 'Friday Night Lights' has been renewed for two more 13-episode seasons that will air through 2011.

Although the show has a loyal core audience, it's had a hard time drawing a consistent broadcast network-sized ratings in its three seasons.

The renewal was made possible because of the continued partnership between NBC and DirecTV -- which will once again air the original episodes first, commercial-free as the marquee property on its 101 Network channel.

"As a TV writer, you rarely get that opportunity to know exactly what the life of your series is going to be. Not only do we know the show is staying on, but we know exactly how many episodes we are going to do," said excited executive producer Jason Katims.

"We'll be able to think about where we might want to lead to ... what kind of stories we want to tell. Down to every last person who works on this show, we are invested and passionate about the future."

Angela Bromstad, president of prime-time entertainment for NBC, acknowledged DirecTV's role in the renewal: "DirecTV has turned out to be a great deal and an amazing partnership. We wish it had a bigger audience, but it has a very solid fan base, a great cast and a great leader."

The drama is averaging 4.5 million viewers this season, down from its average of 6.2 million a year ago, but that was expected since the season premiered on DirecTV in the fall, months before it began airing on NBC in January.

The Texas football-family drama starring Kyle Chandler and Connie Britton has consistently been a bright spot with critics.