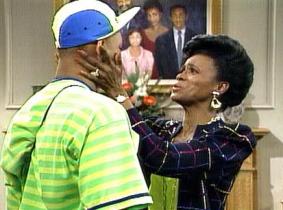 Hubert, who co-starred alongside Will Smith on the sitcom that made him a star, criticized the power couple in a video after Mrs. Smith suggested it was time to "make the change... pull back our resources... put them back into our communities and our programs and we make programs for ourselves that acknowledge us in ways that we see fit."

Referring to Pinkett Smith as "Miss Thing," Hubert begins: "Does your man not have a mouth of his own with which to speak?"

Hubert says years ago, when starring with Smith, she asked him about negotiating together for a castwide raise like many "white shows" did.

"Your response to me was 'my deal is my deal. And your deal is your deal,'" she says.

"Well karma must be a b---h because now here you are, you've had a few flops. There are those out there who really deserved a nod and Idris Elba was one of them. Lord have mercy! Beasts of No Nation was incredible that man is an incredible actor. You are not. Maybe you didn't deserve a nomination."

"You ain't Barack and Michelle Obama. And y'all need to get over yourselves. You have a huge production company that you only produce your friends and family and yourself. So you are a part of Hollywood, you are part of the system that is unfair to other actors. So get real."

"You know some of us have got mortgages to pay, we got bills to pay, we have bigger sh-t to worry about than the Oscars."