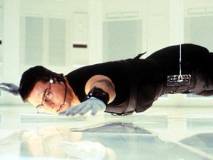 The first trailer for 'Mission Impossible: Ghost Protocol' has leaked online out. The bad news? It's shot off the screen from a screening room and entirely in French.