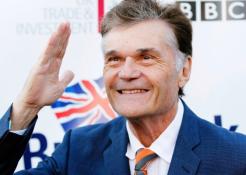 Seasoned actor and narrator, Fred Willard, says his version of the events that led up to his arrest at an adult movie theater was "much more PG."

Willard's arrest for a lewd act in public at an adult theater led to his dismissal from PBS as narrator on 'Market Warriors'.

The 72-year-old said on Twitter that the whole incident was a "big misunderstanding" and was "all being straightened out" and jokes that the film was "lousy."

He added that the "theater would make a great racquetball court" and that the full story was to follow.

Willard also reminded his audience that while he had been fired from one show, he would still be hosting ABC's 'Trust Us With Your Life': "I was not fired from TUWYL... so be sure to watch."

After the alleged incident, which took place at the Tiki Theater at the Santa Monica Boulevard, Willard's lawyer issued a statement saying: "Our belief is that Fred did nothing in any violation of any law. We will be working vigorously to clear his name in this matter."

PBS President Paula Kerger said last week that the decision to drop Willard was made because the "unfortunate circumstances" would distract attention towards the show. The broadcaster has replaced Willard with Mark Walberg, who hosts the 'Antiques Roadshow'.