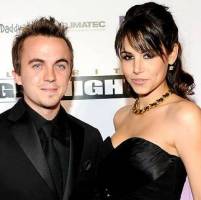 "After four years together, I'm so happy to be engaged to the love of my life!!!," the former 'Malcolm in the Middle' star says on Twitter.

The engagement comes eight months after being involved in a domestic dispute during which police were called after Muniz reportedly put a gun to his head.

At the time, Elycia told cops the 25-year-old "punched her in the back of the head" and "threw her into a wall" following an argument about "prior relationships."

Since the two showed no signs of physical injury and there was there damage to the residence -- despite a crazed 911 call -- both were given a warning but told they would be arrested if they got out of control again.

Something they've now got a whole lifetime together to do.