Fox Sets 'Simpsons' Marathon With All 500 Episodes Of Series 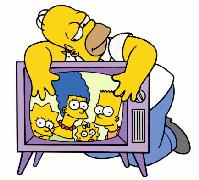 Fox is putting the final touches on a marathon for 'The Simpsons' that will show fans all 500 episodes of the series in one sitting.

The network is sponsoring the marathon to celebrate the 500th episode of the long-running series and take over a new Guinness World Record for longest continuous television viewing in the process.

The record is currently held by three viewers of '24', who beat out 100 other contestants in a similar marathon organized by Fox in 2010 by watching 86 hours, 6 minutes and 41 seconds to watch all six seasons of the drama.

'Simpsons' fans will have to stay awake for 200 hours to watch all episodes of the series, which won't be an easy task. So this will likely come to down to a single winner in a battle with sleep.

Fans interested in singing up can do so at SimpsonsMarathon.com, but Fox will only select 100 fans to take part in the challenge on February 8 at Hollywood & Highland. The first prize for severe headaches and insomnia is $10,500.