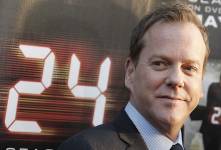 Fox is set to wrap up its long-running hit franchise after this season, the show's eighth.

'Variety' reports that a final decision will be made in the next day or two. However, the news will not come as a huge surprise to cast and crew.

The key reason behind the move will be that, while ratings have dipped from previous seasons, the cost of producing '24' has continued to increase.

It will mark the end of an era for Fox, with '24' being one of the tentpole shows that helped take the network to where it is now, a top rated network that is home to 'American Idol' and 'House'.

But a little known fact is that '24' was almost cancelled after its first season. The show, averaging 8.6 million viewers, was given a vote of confidence after serious deliberations by executives who wanted to give the real-time presentation drama another year to prove itself.

Ratings continued to be low at the beginning of the second year, however, '24' surged to new heights when 'American Idol' became its lead-in midway through the season. It ended up averaging 11.73 million viewers over its second season made and was now a bona fide hit.

'24's ratings peak came in the fifth season as the series focused on Charles Logan and his presidency. It averaged an impressive 13.78 million viewers that year.

But even though '24' may be wrapping up on television, the franchise is far from over. Executive producer Howard Gordon has already said he is keen on taking the drama to the big screen and recently hired Billy Ray, the writer for 'State of Play' and 'Flightplan', to pen a script that will take Jack Bauer to Europe.

"My hope is to go after the eighth season," Gordon said last year, "and Keifer and I have talked about it, and I think that’s sort of what we're aiming for."