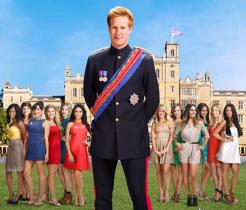 Fox has debuted the first trailer for its new show 'I Wanna Marry Harry', that aims to dupe 12 women with the promise of a royal.

The women will compete for Prince Harry's love. Except Harry is really ordinary Brit Matthew Hicks.

If the show reminds you of Fox's 'Joe Millionaire' from 2003, in which women were duped by a construction worker, that's because it's from the same team.

'I Wanna Marry Harry' premieres on Tuesday, May 27.