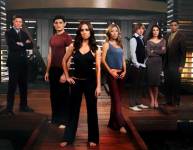 The Joss Whedon drama, which received a surprise renewal for a second season in May despite less than impressive ratings, will come to an end after its current 13-episode order.

The good news is that Fox is sticking to its promise and will air all remaining episodes of the series. Whedon is beginning work on giving the series a proper ending with a worthy finale.

"I don't have a lot to say," says Whedon, whose cult show 'Firefly' was also cancelled by the network years earlier. "I'm extremely proud of the people I've worked with: my star, my staff, my cast, my crew. I feel the show is getting better pretty much every week, and I think you'll agree in the coming months."

"I'm grateful that we got to put it on, and then come back and put it on again. I'm off to pursue internet ventures and binge drinking," he jokes.

"Possibly that relaxation thing I've read so much about. By the time the last episode airs, you'll know what my next project is. But for now there's a lot of work still to be done, and disappointment to bear."

The show is in the midst of filming episode 11 so Whedon will need to work some of his magic to bring it all together within two episodes, without making any of the developments seem forced or inconsistent with the story.

Currently on hiatus, 'Dollhouse' returns to the schedule with two episodes each night on December 4, December 11 and December 18 from 8 PM to 10 PM. The final three episodes will air on January 8, January 15 and January 22 at 9 PM.