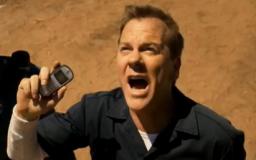 Kiefer Sutherland's official return to television may be a few months away but Fox is hoping to drum up interest in 'Touch' with its special preview on Wednesday night.

The network will air an extended cut of the show's first episode tonight that its hoping will give viewers a taste of what to expect and hook them before the show returns in March.

'Touch' centers on Martin Bohm (played by Sutherland) -- a widower and single father haunted by an inability to connect to his mute 11-year-old son, Jake (David Mazouz).

After multiple failed attempts at keeping Jake in school, with the help of Arthur Dewitt (Danny Glover), Martin discovers that Jake possesses the ability to see things that no one else can and the patterns that connect seemingly unrelated events.

With Martin now on a mission to decipher the meaning and connect the numbers to characters whose lives they affect, the show is being called a sentimental '24'. And with Tim Kring as series creator, there's definitely plenty of coincidences and mumbo-jumbo to go around.

But with Sutherland's as a father hoping to connect with his son at the very core of the story, the plot and suspense will tug at your heart strings.