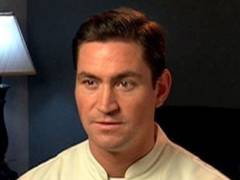 A former contestant on 'Top Chef: Just Desserts' has been indicted for possessing child pornography.

Morgan Wilson, who competed on the Bravo reality series last fall, has been indicted on three second-degree felony charges of possession with intent to promote child pornography after undercover investigators received several files from his computer via a sharing application.

The files allegedly contained pornographic images and videos of children as young as toddlers.

Investigators tracked down the transfer to Wilson and the pastry chef admitted he had viewed the images seen by the agents.

Wilson, who was working as the executive pastry chef at the Ritz Carlton in Dallas, is scheduled to appear before a Collin County judge on October 27.

On the show, the 38-year-old Wilson was known for his emotional outbursts and, largely, being a jerk.