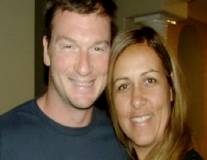 Former 'Survivor' producer Bruce Beresford-Redman has been arrested in the murder of his wife.

Beresford-Redman is charged with killing his wife Monica while on a family vacation in Mexico. He was arrested outside his Rancho Palos Verdes, California home Tuesday by US marshals and is now in federal custody while extradition proceedings get underway.

His wife, Monica, a 41-year-old Los Angeles restaurant owner and mother of two, was found dead in April in the sewer at a Cancun resort where the couple had been vacationing.

Even though Mexican authorities claim that blood stains were found in his hotel room, including on the sheets and the railing, Beresford-Redman has maintained he is innocent and says he will fight extradition.

They believe that Monica discovered her husband was having an affair before the trip and had been seeking a divorce. The couple traveled to Mexico in an attempt to reconcile but that was the last trip she took.

The affair was separately confirmed through e-mails obtained by the Mexican authorities and hotel logs show someone entering and leaving the room numerous times in the early morning after one fight that rattled guests in a neighboring room.

"Based upon our investigation, he is an innocent man being wrongfully accused by a foreign government," says Hirsch. "We hope that after full consideration of both sides, a federal court will decide not to extradite him."

Bruce was able to leave Mexico before authorities issued a warrant for his arrest in May.

He is due in a Los Angeles court Wednesday for the first hearing in what is expected to be a lengthy fight over his extradition.