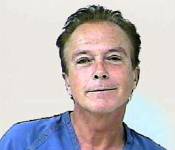 Former "Partridge Family" heartthrob David Cassidy has been charged with driving under the influence in Florida.

According to the arrest report, a Florida Highway Patrol trooper spotted Cassidy's white Mercedes driving erratically on the turnpike. The actor's car apparently crossed the center divider line, then cut off another driver while attempting to merge onto an exit ramp.

Cassidy told a trooper that he had a glass of wine at lunch and a hydrocodone tablet.

He was booked after he was found to be unsteady on his feet and failed several field sobriety tests. He blew a .14 on a breath test, well above the legal limit in the state of Florida.

Police also found a half-empty bottle of bourbon on the back seat of the vehicle.

Cassidy, now 60, was charged with driving under the influence, failure to maintain a single lane and having an open container. He spent nine hours in jail before being released after posting $350 bail.

His spokeswoman, Jo-Ann Geffen, admits Cassidy took a pain pill but insists he was not drunk and was merely tired from attending a funeral.