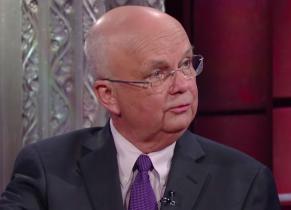 General Michael Hayden, former director of the CIA and NSA, dismisses President Donald Trump's wiretapping accusations against Barack Obama and promises Stephen Colbert that he's not being spied on through his TV.

"Can the president just find out for himself that this happened?," asks Colbert about Trump's claims.

"That why I wondered what happened on Saturday morning," says Hayden. "He seemed to have forgotten that he was President of the United States."

"Well, every morning I hope that it's just some terrible dream," quips Colbert.

Hayden goes on to explain why the wiretap couldn't have happened and that the President does not have the authority to demand such surveillance.

Later in the interview, the pair discuss the shocking Wikileaks dump that reveals the CIA uses everything from phones to televisions and cars to spy on people.

Rather than deny the agency has such tools Hayden insists: "I can tell you that these tools would not be used against an American."