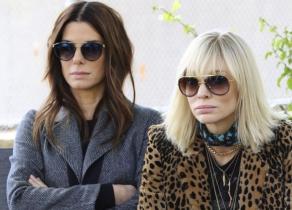 This first trailer for the female-led 'Oceans 8' has been released and this time it's Debbie Ocean planning the heist.

) stars as Debbie, the estranged sister of George Clooney's Danny Ocean. After being just released from prison, she teams up with Cate Blanchett's Lou to recruit the team and steal a necklace worth $150 million.

) as a computer hacker and Helena Bonham Carter as a fashion designer.