First Trailer For 'Rise of the Planet of the Apes' 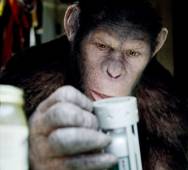 We got a short look at WETA's digitally created Apes earlier this week, and now 20th Century Fox has released its first trailer for Rise of the Planet of the Apes.

The film stars James Franco as a scientist whose experiments with genetic engineering lead to the development of intelligence in apes and the onset of a war for supremacy.

Since you wouldn't have known it by seeing the CGI apes, WETA promotes itself as the digital studio's behind Avatar in the trailer.