First Trailer For Ridley Scott's Return To Space In 'Prometheus' 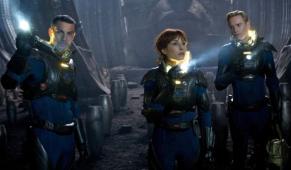 Ridley Scott, director of 'Alien' and 'Blade Runner', is once again returning to outer space with 'Prometheus'.

And while the first trailer for the highly anticipated film doesn't reveal much in itself, we can tell you the film follows a team of explorers who discover a clue to the origins of mankind on Earth.

The clue leads them on a "thrilling journey to the darkest corners of the universe," says the official release. "There, they must fight a terrifying battle to save the future of the human race."

"It's all about everything," he says. "I come from the All About Everything School."

), Micheal Fassbender, Idris Elba and Guy Pearce. The film currently has a release date of June 8, 2012.