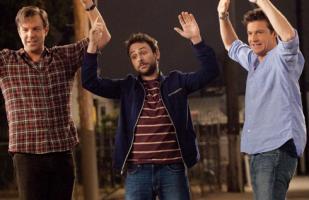 Jason Bateman, Charlie Day and Jason Sudeikis reunite in the follow-up to the 2011 comedy 'Horrible Bosses'.

), Jamie Foxx and Kevin Spacey also reprise their roles while Chris Pine and Christoph Waltz step in as new adversaries standing between Nick, Dale and Kurt and their dreams of success.

In the sequel, fed up with answering to higher-ups, the guys decide to become their own bosses by launching their own business. But a slick investor soon pulls the rug out from under them.

Outplayed and desperate, the three hatch a plan to kidnap the investor's adult son and ransom him to regain control of their company.