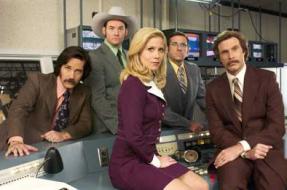 It's been less than two months since Will Ferrell announced an 'Anchorman' sequel was in the works and the film hasn't even started shooting yet but we've got our first teaser.

"Get ready to ride the Palamino stallion," says Ferrell.

'Anchorman: The Legend Continues' is currently aiming for a release at the end of 2013.