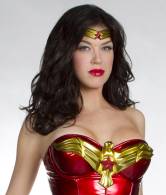 NBC has released its first photo of Adrianne Palicki in her Wonder Woman outfit.

Palicki is decked out in a super-sexy, skin-tight suit with big boots for the network's upcoming reboot of the superhero series, including the bullet-proof bracelets and Lasso of truth.

The outfit gets rid of the stars from the classic 1970s series and replaces bare legs and red boots with shiny blue pants.

"You know, I'm very sensitive to the fact that she will be compared... There's no getting around it. It is what it is. I would hope that people would cut her some slack."

"I'm sure there will be people who say she looks better than me and like her better than me—and that's also fine. I want this story to be told again. I'm really excited. I can't wait to see it."

David E. Kelley, who is currently working on the pilot, has promised a more serious, non-campy take on the character.