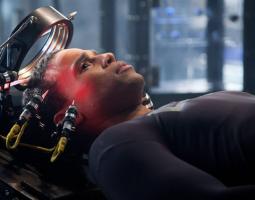 Fox has released extended trailers to give us a taste of what to expect from its new shows next seasons. The network will introduce four dramas and six comedies.

Let's start with JJ Abrams' futuristic action drama Almost Human set 35 years in the future, when police officers are partnered with highly evolved human-like androids. An unlikely partnership is forged when a part-machine cop (Urban) is forced to pair with a part-human robot (Michael Ealy) as they fight crime and investigate a deeper cover-up in a futuristic new world.

Rake, slated for midseason, stars Greg Kinnear as Keegan Deane, one of life's great addicts, a brilliant and frustratingly charming criminal defense attorney, whose chaotic and self-destructive personal life often gets in the way of his professional one. Keegan takes on the cases that nobody else will touch, ruled by a resolute optimism, belief in justice and dogged determination to defend those who seem beyond redemption - much like himself.

Adventure thriller Sleepy Hollow is a modern-day retelling of Washington Irving's story, Ichabod Crane (Tom Mison) is resurrected and pulled two and a half centuries through time to find that the world is on the brink of destruction and that he is humanity's last hope, forcing him to team up with a police officer (Nicole Beharie) to unravel a mystery that dates back to the founding fathers.

Drama Gang Related follows Ramon Rodriguez's Ryan, a rising star in Los Angeles' elite Gang Task Force, who teams up with a longtime member to take on the city's most dangerous gangs, including one he has an allegiance to.

Moving on to the comedies, Seth MacFArlane's first live-action comedy Dads stars Seth Green and Giovanni Ribisi as two successful gaming entrepreneurs - and childhood best friends - whose lives get turned upside down when their pain-in-the-neck patriarchs move in.

Brooklyn Nine-Nine is a new single-camera workplace comedy starring Andy Samberg about what happens when a hotshot detective gets a new Captain (Andre Braugher) with a lot to prove.

Surviving Jack, based on the book 'I Suck at Girls', stars Christopher Meloni as a man becoming a dad, as his son becomes a man, in a time before "coming of age" was something you could Google.

Then we have the Army-set sibling comedy 'Enlisted, a single-camera comedy about an older sibling who returns home to reconnect with his two brothers and lead a group of misfits on a small Florida Army base.

Finally, Us & Them is an ensemble comedy about a young couple, whose path to happily-ever-after is complicated by the screwed-up circus of people closest to them.

Animated comedy Murder Police will also join the Fox lineup but we don't have a trailer for that yet. The series features the voices of Will Sasso, Chi McBride and Jane Lynch to follows a dedicated, but inept detective and his colleagues in a twisted city precinct.