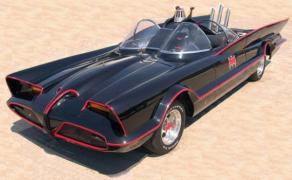 The first Batmobile produced in the 1960s for the original Batman television series has been sold at auction for $4.6 million.

Rick Champagne, a businessman and collector from Phoenix, Arizona who has been attending the Barrett-Jackson auctions for over almost 15 years, put up the whopping sum.

Legendary Hollywood car designer George Barris had constructed the Batmobile in 1966 for $15,000 on top of an existing Ford Futura from a decade earlier.

The car had been in Barris' possession until it was put up for auction this year.

The Aston Martin DB5 that Sean Connery drove in 'Goldfinger' also sold for $4.6 million a few years ago.

It held the record for the highest price paid for a movie car at an auction before being tied by the Batmobile.