'Fire and Fury' Author Claims President Trump Is Having An Affair 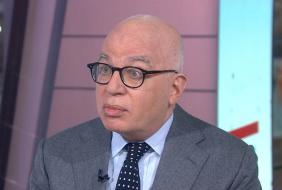 Michael Wolff's book 'Fire and Fury: Inside the Trump White House' is already a bestseller.

But Wolff says he left out that Presdient Trump is currently having an affair because he didn't have the "ultimate proof" to include such a claim.

"There is something in the book that I was absolutely sure of but it was so incendiary that I just didn't have the ultimate proof," Wolf said in an appearance on 'Real Time with Bill Maher'.

"I didn't have the blue dress," he said, referring to the infamous dress that exposed former President Bill Clinton's affair with Monica Lewinsky.

Asked if it was somebody Trump was involved with right now, Wolff replied: "It is."

"And it's... you just have to read between the lines. It's toward the end of the book," he hinted. " You just have to... you'll know it. Now that I've told you, when you hit that paragraph, you're going to say, 'Bingo.'"

Interestingly, towards end of book, Wolff writes: "By October, however, many on the president’s staff took particular notice of one of the few remaining Trump opportunists: Nikki Haley, the UN ambassador."

"Haley, 'as ambitious as Lucifer', in the characterization of one member of the senior staff—had concluded that Trump's tenure would last, at best, a single term, and that she, with requisite submission, could be his heir apparent."

"Haley had courted and befriended Ivanka, and Ivanka had brought her into the family circle, where she had become a particular focus of Trump's attention, and he of hers."

"The president had been spending a notable amount of private time with Haley on Air Force One and was seen to be grooming her for a national political future. Haley, who was much more of a traditional Republican, one with a pronounced moderate streak was, evident to many, being mentored in Trumpian ways. The danger here, offered one senior Trumper, 'is that she is so much smarter than him.'"