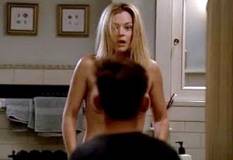 A federal appeals court has ruled that the Federal Communications Commission cannot fine ABC and its affiliates $1.4 million for a 2003 episode of 'NYPD Blue' that showed actress Charlotte Ross' nude buttocks.

The court said its finding was consistent with its decision last year that TV stations can no longer be fined for fleeting, unscripted profanities uttered during live broadcasts.

The three-judge 2nd Circuit panel wrote that there was 'no significant distinction' between its decision in the expletives case and its findings in the 'NYPD Blue' case, which showed nudity on the police drama for less than seven seconds.

"According to the FCC, 'nudity itself is not per se indecent,'" the judges wrote. "The FCC, therefore, decides in which contexts nudity is permissible and in which contexts it is not pursuant to an indecency policy that a panel of this court has determined is unconstitutionally vague. Although this case involved scripted nudity, the case turns on an application of the same content-based indecency test."

The 'NYPD Blue' episode, called 'Nude Awakening', focused on the awkwardness between Det. Andy Sipowicz's girlfriend, and his son, who walks in on her as she is about to take a shower. Charlotte Ross' nude behind and a side of one of her breasts were shown before she covered up with her hands.

"Children and families are the real victims today. This ruling will only serve to embolden the networks to air even more graphic material," Winter said in a statement. "In this instance, ABC intentionally chose to air a scripted visual depiction of a fully naked woman before 10 PM. There was absolutely nothing fleeting or accidental about it."

"The inclusion of the lengthy and ogling scene was intended to pander and titillate. This was a clear breach of the decency law. And now, nearly eight years after the episode aired, ABC is told it doesn't have to abide by the law. It is unfortunate that the industry's blatant forum-shopping effort is being rewarded with such outlandish decisions."