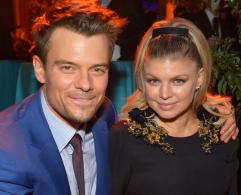 Fergie teared up as she opened up about her split from husband Josh Duhamel on 'The Wendy Williams Show'.

"It wasn't my plan. I wanted to stay married forever," the singer told Williams in an episode that will air on Thursday.

"I love Josh, he's the father of my child... You're making me cry," she said. "We forever have that project together and we're doing the best we can."

Fergie and Duhamel had been living apart since February as they tried to figure out their relationship.

The pair eventually announced in September that they would be splitting after eight years of marriage.