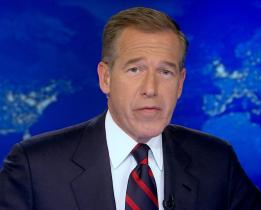 During his first night back anchoring primetime, Brian Williams had to deal with an F-bomb during the live broadcast.

Williams was hosting the network's live coverage of the Iowa caucuses when a young female voter and veteran lambasted healthcare for veterans.

"The VA is more screwed up than it has been in a while," she said. "The fact that I haven’t gotten benefits in three months because the VA is so f--ked up, really makes me concerned."

The mic was quickly moved away from the woman and Williams had to cut in to apologize for the language.

"Well, you know, when you listen into caucuses you take the good with the bad," he began, "and people often speak the way they do out on the street and we apologize."

"I know Jacob apologizes, and we all join in in apologizing for a bit of French that snuck into our English language translation there."