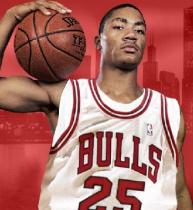 A Chicago Bulls fan casts 2011 NBA MVP Derrick Rose in the role of Batman and LeBron James as villain Bane in this video that anticipates Rose's return set to the 'The Dark Knight Rises'.

Rose tore the ACL in his left knee with a minute left in Game 1 of the first round of the playoffs against the Philadelphia 76ers last season.

As you may expect, the video is titled 'The Red Knight Rises'.