Fox's 'Family Guy' will be premiering its sixth season with an hour-long episode that retells the 'Star Wars' saga using 'Family Guy' characters.

Lucasfilm has given permission to the show to act out all the key scenes and dialogue from 'Star Wars: Episode IV -- A New Hope,' the first installment of the franchise.

Peter Griffin will play the role of Han Solo, Lois will play Princess Leia, Stewie will be Darth Vader, Brian will be Chewbacca, while Chris is Luke. Robots R2-D2 and C-3PO will be done by Cleveland and Quagmire, and Herbert will fill the role of Obi-Wan Kenobi.

The episode will revolve around a blackout, during which Peter decides to tell the 'Star Wars' story.

'Family Guy' creator Seth MacFarlane is a big 'Star Wars' fan and it is thought the episode was his idea. It airs on September 23, 2007.

Below is a preview video for the episode, alongwith a fun poster: 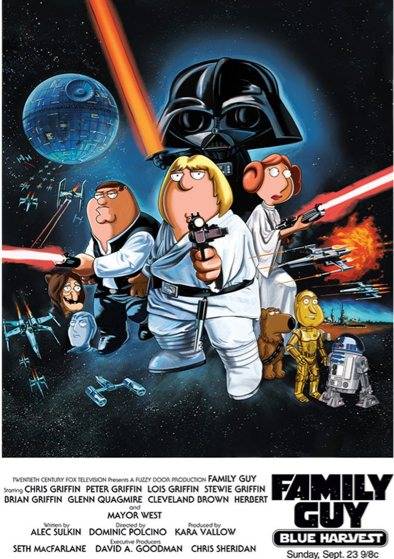