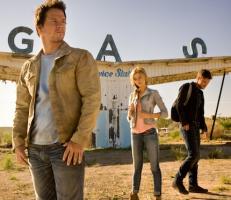 The extended trailer for 'Transformers: Age of Extinction' has been released.

Starring Mark Wahlberg, Stanley Tucci, Li Bingbing , Kelsey Grammer, Sophia Myles and Titus Welliver, the film begins with humanity picking up the pieces from the war between the Autobots and Decepticons, a shadowy group reveals itself in an attempt to control the direction of history.

As with any Michael Bay film, the Transformers find themselves in a climactic battle with lots of explosions but not before Optimus Prime discovers he must align with the Dinobots to save the Earth from extinction.

'Transformers: Age of Extinction' is set to be released on June 27.