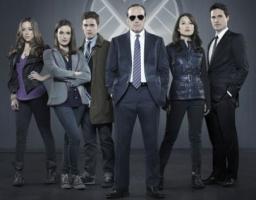 We got our first look Marvel's 'Agents of S.H.I.E.L.D' earlier this week with a teaser, but ABC has now released an extended trailer comprising of footage from the first few episodes.

Clark Gregg reprises his role of Agent Phil Coulson as he assembles a small, highly select group of Agents to investigate "the new, the strange, and the unknown protecting the ordinary from the extraordinary."

Let's rundown the other new ABC shows below starting with the dramas.

Betrayal: A chance meeting between photographer Sara Hadley (Hannah Ware) and Attorney Jack McAllister (Stuart Townsend) leads to an instant and undeniable attraction. Sarah's husband, Drew (Chris Johnson), is a successful prosecutor with political aspirations, while Jack is married to Elaine (Wendy Moniz), the daughter of his boss, Thacher Karsten (James Cromwell). When Karsten's brother-in-law Lou is murdered, all evidence points to Karsten's son, T.J. (Henry Thomas). Jack, the company's lead counsel, will have to defend him, but for Sara's prosecutor husband, Drew, this is the kind of high-profile murder case that can secure his political future. Just as Sara and Jack's affair is starting, the lovers find themselves in an impossible situation -- on opposite sides of a murder investigation.

Killer Women: Of all the notorious lawmen who have ever patrolled the violent Texas frontier, none are more storied than the Texas Rangers. But being the only female ranger in this elite squad isn't going to stop ballsy, badass Molly Parker (Tricia Helfer (photos

)). Molly is committed to finding the truth and seeing justice served. While she's surrounded by law enforcement colleagues who want to see her fail, including Police Lieutenant Guillermo Salazar (Vic Trevino), the Rangers have her back, led by Company Commander Luis Zea (Alex Fernandez).

Lucky 7: In Astoria, Queens, a group of seven gas station employees have been chipping into a lottery pool for months, never thinking they'd actually win. Money could solve problems for each of them: Matt (Matt Long) could get his girlfriend and two kids out of his mother's house; Matt's brother, Nicky (Stephen Louis Grush), an ex-con, could pay off a dangerous debt; Samira (Summer Bishil), a second-generation Pakistani immigrant, could afford to go to Juilliard; Denise (Lorraine Bruce), a plucky cashier, could focus on rebuilding her crumbling marriage; Leanne (Anastasia Phillips), a young mother, could help her daughter realize her dreams; Bob (Isiah Whitlock, Jr.), the store's manager, could finally retire; and Antonio (Luis Antonio Ramos) could give his wife and kids a whole new life.

Resurrection: The people of Arcadia, Missouri are forever changed when their deceased loved ones suddenly start to return. An 8-year-old American boy (Landon Gimenez) wakes up alone in a rice paddy in a rural Chinese province with no idea how he got there. Details start to emerge when the boy, who calls himself Jacob, recalls that his hometown is Arcadia, and an Immigration agent, Martin Bellamy (Omar Epps), takes him there. The home he claims as his own is occupied by an elderly couple, Harold (Kurtwood Smith) and Lucille Garland (Frances Fisher), who lost their son Jacob more than 30 years ago. While they look different, young Jacob recognizes them as his parents. Those closest to the family try to unravel this impossible mystery, including Sheriff Fred Garland (Matt Craven), whose wife Barbara drowned 30 years ago while trying to save Jacob. But this boy who claims to be the deceased Jacob knows secrets about his own death that no one else knows -- secrets that Fred's daughter, Gail (Devin Kelly), will begin to investigate and discover to be true.

The comedies begin with a trailer for 'The Goldbergs': Before there were parenting blogs, trophies for showing up and peanut allergies, there was a simpler time called the '80s. For geeky 11-year-old Adam (Sean Giambrone) these were his wonder years, and he faced them armed with a video camera to capture all the crazy. The Goldbergs are a loving family like any other, just with a lot more yelling. Mom Beverly (Wendi McClendon-Covey) is a classic "smother," an overbearing, overprotective matriarch who rules this brood with 100% authority and zero sense of boundaries. Dad Murray (Jeff Garlin) is gruff, hot-tempered and trying to parent without screaming. Sister Erica (Hayley Orrantia) is 17, hot, terrifying and not one to mess with. Barry (Troy Gentile) is 16, a grade-A spaz with classic middle child syndrome. Adam (Sam Giambrone) is the youngest, a camera-wielding future director who's crushing on an older woman. Rounding out the family is beloved grandfather Al "Pops" Solomon (George Segal), the wild man of the clan, a shameless Don Juan who's schooling Adam in the ways of love. When Pops buys a new sports car and offers his Caddy to middle child Barry, it's enough to drive this already high-strung family to the brink of chaos.

Back in the Game: Terry Gannon Jr. (Maggie Lawson) was an All Star softball player until life threw her a few curve balls -- a baby, a lost college scholarship and a loser for a husband. After striking out on her own, Terry and her son, Danny (Griffin Gluck), move in with her estranged father, Terry Sr., aka "The Cannon" (James Caan). The Cannon is an opinionated, beer-guzzling, ex-athlete who never quite made the cut either as a single father or professional baseball player. As hard as Terry tries to keep Danny away from the sports-driven lifestyle of her youth, Tommy wants to play Little League. His stunning lack of baseball skills (he doesn't even know which hand the mitt goes on) makes him the laughing stock of the baseball field and of his grandfather's living room. When Danny and a group of other athletically-challenged hopefuls fail to make the team, Danny's disappointment forces Terry to face her past. So when a wealthy neighbor volunteers to finance a team for the rejected kids, Terry reluctantly offers to coach the team of misfits.

Mixology: One bar. One night. Ten single people. Welcome to Union, a high-end bar in Manhattan's trendy meat-packing district. Recently dumped by his fiancee, Tom (Blake Lee) hasn't been out on the town in a decade. His best friends, handsome, confident Cal (Craig Frank) and fast-talking Bruce (Andrew Santino), are throwing Tom back into the dating pool whether he likes it or not. Tom's first encounter is with Maya (Ginger Gonzaga), an attorney who's as beautiful as she is brutal; before long, Tom is in tears. After that, it only gets worse. Rounding out Union's chic crowd is Maya's engaged-for-now friend, Liv (Kate Simses); aggressive single mom Jessica (Alexis Carra); her younger, naive sister, Janey (Sarah Bolger); bubbly cocktail waitress Kacey (Vanessa Lengies); dark, mysterious bartender Dominic (Adan Canto); and failed internet entrepreneur Ron (Adam Campbell), who's having the worst night of his life.

Super Fun Night: Junior attorney Kimmie Boubier (Rebel Wilson) and her two best friends, Helen-Alice (Liza Lapira) and Marika (Lauren Ash), have had a standing date every Friday night for the last 13 years. They even have a motto for what they call "Friday Night Fun Night": "Always together! Always Inside!" However Kimmie's recent promotion throws a monkey wrench into the tradition. Not only is she now working with her idol, "Lady Lawyer of the Year" Felicity Vanderstone (Kelen Coleman), but she meets a dashingly handsome British attorney, Richard Lovell (Kevin Bishop), who invites her to his party at a trendy club. Determined to spend time with Richard and heed Felicity's advice to network, Kimmie sets out to convince her friends to take Super Fun Night on the road.

)) is hoping that's true when she becomes Pete's (Bradley Whitford) third wife. She fell into his arms (literally) at a karaoke bar, and a year later Kate's got an insta-family, complete with three stepchildren and two ex-wives. Diane (Marcia Gay Harden) is ex-wife number one, an intense, over-achieving doctor and the mother of twin teenagers Hillary (Gianna LePera) and Warren (Ryan Scott Lee). Diane is quick to convey her withering disapproval of Kate's barely tapped maternal instinct. Ex-wife number two, Jackie (Michaela Watkins), is mother to adopted son Bert (Albert Tsai), and can pull Pete's strings with her special blend of neurotic, new-ageyness. Juggling all this baggage is uncharted territory for Kate, who finds support with her best friend Meg (Natalie Morales), a party-hearty singleton and the only woman Kate knows who has less experience with kids than she has.