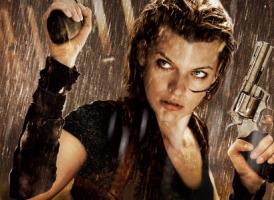 Milla Jovovich returns as Alice in the newest installment of 'Resident Evil', titled 'The Final Chapter'.

Picking up immediately after the events in 'Retribution', Alice must return to where the nightmare began with humanity on its last legs against the undead hordes.

The three minute trailer builds slowly but quickly moves into the action, destruction and beasts we expect from this franchise.