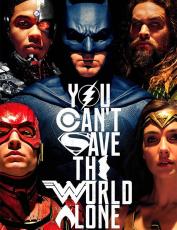 Warner Bros. has released the exciting four minute sneak peek that debuted at from Comic-Con.

The sneak peek doesn't feature its most popular -- Superman -- other than a reference to his death. Although he does seem to make an appearance at the cryptic end of the clip.

At the panel, Gal Gadot teased: "We can't say much but if you're a big man of Superman then I am sure you're going to be very, very happy watching this."